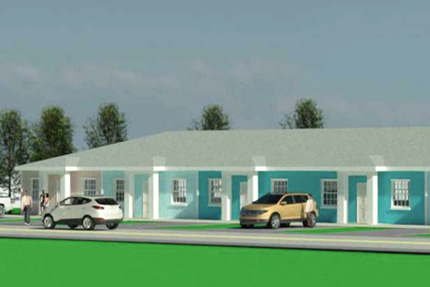 Saint Stephen’s Way was formed in 2012 as a faith-based nonprofit with the sole mission of providing affordable housing with supportive services to homeless families with school-aged children in Brevard County. For several years the organization searched for a suitable property; the search led to 8 acres of undeveloped land on Crane’s Creek near downtown Melbourne. The land was donated by the People of Destiny Christian Fellowship Church, formerly the Tabernacle Church, which had been entrusted with the property owned by a missionary couple who wanted the land to be used for God’s work.

With construction financing from Florida Community Loan Fund, SSW will build forty 3-bedroom apartments in 8 buildings, along with the Holman Community Center, named for missionary Nellie Holman. An existing single-family home on site will house administrative offices and a caretaker’s residence. SSW will meet critical housing needs for families with incomes below 50% of the area median income in Brevard County, and provide access to resident services from area agencies including Housing Authority of Brevard’s Resident Opportunity and Self Sufficiency (ROSS) Program, as well as supportive services offered by key service partners including Catholic Charities, Brevard Health Alliance and others. Through the 40 apartments and related services, SSW expects to serve 40 families, (between 124 and 240 area residents), annually, and the project is estimated to create 3 permanent jobs and 50 temporary construction jobs.

Saint Stephen’s Way is located in a census tract where the average household income is at 36% of the Area Median Income (AMI), 37% of residents live below the poverty line, and 63% of residents are minority. The City of Melbourne is in support of the project and will permanently defer a portion of development and impact fees for the project. Long-term affordability of the homes will be ensured through a land use restriction agreement with the City.

City of Melbourne Mayor Paul Alfrey said in February about the Saint Stephens Way project: “When the stress that parents face due to poor living conditions and the worry of how they will be able to afford their rent is removed, their children's emotional and behavioral problems greatly improve. As a consequence, when the financial burden is removed from parents' shoulders, financial resources can now be invested into the children's health, education and future.”

"We commend the important work of your organization, are glad to support its efforts." – Beverly Dabney

“The partnership with FCLF is very exciting for us – an essential component in providing greater access to fresh healthy food in downtown New Port Richey.” – Jeff Wright, Owner

"FCLF has proven its community impact and hard work. We are proud to partner with FCLF." – Leslie Watson, Analyst, Community Investments

"Cade Museum is proud to be partners with FCLF and JPMorgan Chase. Thanks to the NMTC Program, we will provide a transformative asset to our community." – Jennifer Denault, COO

“FCLF is much more than a financing entity; they are the ultimate partner. They are on the front line protecting and building resources for the most vulnerable in our community."– Seth Eisenberg

“Expanding our facility with NMTC financing provides the Overtown community resources necessary to provide a fighting chance to break down barriers and break the cycles of poverty.” – Tina Brown, CEO

“The collaboration with FCLF and using NMTC financing allows us to bring the most ambitious projects to life to benefit the communities we serve.” – Elodie Dorso, President & CEO

"FCLF understands and is a part of what we are doing: helping families have the American dream of owning a home." – Isaac Simhon, Executive Director

“FCLF addresses local community needs, which aligns with our core values. We appreciate your commitment to our communities.” – Mellissa Slover-Athey, Comm Reinv Ofcr

"We're thrilled to partner with FCLF to make our project a reality to serve generations of kids in our community." – Dawn Stanhope, President & CEO

“FCLF will help us have significant ongoing impact in West Lakes as we help families set roots in this community.” – Camille Reynolds, Executive Director

“Thanks to FCLF adults with disabilities are living independently, fully included in their community." – Sheryl Soukup, Exec Dir

“Thank you so very much for the exceptional services. We truly value FCLF’s contributions to furthering our mission." – Michael L. Bean, CEO

"FCLF demonstrates a mission-oriented philosophy that is compatible and supportive, broadens our platform and deepens our portfolio of products and services." – Kent Adcock, CEO

Habitat for Humanity of Lake-Sumter

"Thank you to our friends at FCLF. Your staff has been patient and helpful. We'll make you proud!" – Bill Lazar, Executive Director

"Aida Palms will be a lasting asset to the City of Lakeland. This revitalization wouldn't be possible without financing partners like FCLF." – Mitchell Rosenstein, Principal, Green Mills Group

"The Fathers Table Foundation appreciates the services FCLF provides and the impact on the communities you serve. We believe in your organization and your mission." – Dan Gilardi, President

Return To Top
Core Purpose FCLF exists to maximize opportunities for people and places outside of the economic mainstream.
Our Vision Opportunity and dignity exist for every person and community in Florida.
Our Mission Our expertise and capital make projects successful and help organizations improve lives and communities.